Legal defences fall into two categories, excuse defences and justification defences. Excuse defence is when the defendant admits to committing a criminal act but believes that he or she cannot be held responsible because there was no criminal intent. Excuse defences that are used in courts today are; Age, Mental Disorder, Automatism, Mistake of Fact and Mistake of Law. Justification defences involves a defendant admitting that when they committed a criminal act, their actions were justified by; duress, necessity, self-defence, provocation, and entrapment (Goff, 2008, p. 48) .

The automatism (an excuse defence), which is a claim that the environment around us, caused the defendant to commit criminal actions involuntarily, without there really being a criminal intent. With the exception of liability without fault, which requires only actus Reus, a crime requires two elements, actus Reus and mens rea. While most criminal defences attempt to excuse or justify the defendant’s criminal guilt by addressing mens rea, the automatism defence is different in that it attempts to prove that the defendant did not actually commit actus Reus. If the defendant is found to have been acting in the state of automatism when the crime was committed, that is, unconsciously and involuntarily, then he or she cannot be said to have been “acting” at all, in a legal sense. Without actus reus, the defendant cannot be held criminally liable for his actions. Automatism is a very particular circumstance, and difficult to prove in trial. Unconsciousness and involuntary action might be caused by a certain factors, including heavy intoxication, sleep, and being under hypnosis. However, automatism in the sense of a valid legal defence cannot usually hold if the unconscious, involuntary state was the result of voluntary actions. (RENKE, 2010) Automatism doesn’t necessarily mean that the accused has to be unconscious; it means that the consciousness must be so impaired that the accused lacks voluntary control, sleepwalking or taking medication without knowing the effects are examples of automatism (Goff, 2008, p. 49).

Mistake of fact may sometimes be used as a defence to lessen or eliminate the element of mens rea in a crime. In Mistake of law, the defendant does not realize he or she is committing a crime because they are unaware of the law that would have them charged criminally. Mistake of fact involves genuine ignorance of one or more material factors involved in the crime itself. In certain situations when mistake of fact cannot eliminate mens rea, it can sometimes reduce it (Mojo Law legalinfo with soul, 2010).In the inappropriate use of deadly force, for example, if the defendant takes a life while honestly and reasonably mistakenly believing that his own life was in danger, then a mistake of fact could be argued in court to reduce the charge from murder to a lesser homicide such as manslaughter (Mojo Law legalinfo with soul, 2010). Mistake of law is when everyone is presumed to know the criminal law, except for minors, and the general rule that “ignorance of the law is no excuse” which is found in s.19 of the Criminal Code (Goff, 2008, p. 49).

Mental disorder is defined as a disease of the mind. Mental illness is covered under section 16 of the Criminal Code. Disease of the mind is, “any illness, disorder, or abnormal condition which impairs the human mind and its functioning, excluding, temporary conditions of alcohol, drugs, hysteria or concussion”. This definition implies that the accused was not thinking normally at the time of the offence, therefore, could not really comprehend the illegal act at the time (Goff, 2008, p. 49). Examples of mental disorders include schizophrenia, paranoia, and melancholia a profound presentation of depression. With this form of depression, there is a complete loss of pleasure in all or almost everything.

Criminal responsibility is believed to be the age where children should be responsible for the crimes that they have committed, and that under a certain age group, they should not be charged criminally because it is believed that they do not have no knowledge about what they are doing. In Canada, under the age of 12 you lack criminal responsibility, under the Youth Criminal Justice Act. When you turn 18 a person could face full legal accountability because you are considered an adult (Goff, 2008, p. 48).

There are two defences of duress: compulsion, and the common-law defence. Duress justification defence is when a person doesn’t have a free will anymore, because of the wrongful threat of death or bodily harm, of one person, which makes another person commit a crime he or she would not have committed. Common-law defence of duress does not require the threat of bodily harm or death. The common-law defence cannot be used if the accused had a chance to escape the situation safely. (LegalMatch, 1999-2010)The accused person who chooses to use the duress defence must prove: The accused committed the offence because he or she believed that the threats of death or bodily would be carried out. The threats were delivered by a person who was present at the time the accused committed an offence. The accused was not a member of the group planning to commit the offence (Goff, 2008, p. 50). Necessity is related to duress because duress is a type of necessity. The danger is caused by forces of nature or human conduct other than intentional threats of bodily harm, while duress is caused by intentional threats of bodily harm (Goff, 2008, p. 51).

Entrapment is a justification defence. It is not known as a “complete defence” because it is not fully accepted by the courts, and if they are, it results in a permanent stay of proceedings rather than acquittal (Goff, 2008, p. 50). Law enforcements need to be involved in a crime to be considered entrapment, and when law enforcement is involved it is very difficult to investigate, and prosecute unless you have good evidence. Examples are drug sales and possession or prostitution. When prosecution results from law enforcement involvement defendants often claim to have been entrapped; that is, they would not have committed the crime without law enforcement’s participation (Search.com, 2010). Only after the guilty verdict of an accused has been determined by the judge, can the finding that entrapment did occur (Goff, 2008, p. 51).

Section 232 of the Criminal Code, states that Provocation is defined as a wrongful act that deprives an ordinary person of self control, and can only be used for the offence of murder. To prove provocation these elements must be present: A wrongful act or insult occurred, the act or insult was sufficient to deprive an ordinary person of self control; the person responded suddenly, the person responded before there was time for passion to cool (Goff, 2008, p. 51). Provocation is also like entrapment, it is not known as a “complete defence”, and if it is accepted by the courts, it results in an acquittal. An acquittal is a verdict of not guilty. In acquittals the case cannot be tried again, offering a person protection from double jeopardy (Inc, 2010).

Self defence involves defending yourself, as well as your property or defending someone else, which justifies the use of force against a person. Reasonable force can be defined as the minimal force required deterring or preventing an assault from occurring or being repeated. For self defence you can only use as much force as necessary according to section 26 of the Criminal Code, you can be charged with a criminal offence if excessive force is used (Goff, 2008, p. 51). Section 34(2) of the criminal code states: Everyone who is unlawfully assaulted and who causes death or grievous bodily harm in repelling the assault is justified as (a) he causes it under reasonable apprehension of death or grievous bodily harm from the violence with which the assault was originally made or with which the assailant pursues his purposes and (b) believes, on reasonable grounds, that he cannot otherwise preserve himself from death or grievous bodily harm (Justice, 2010). An individual, who causes these harms or kills someone while defending themselves, must have these three elements to prove it was self defence: There was an unlawful assault, a reasonable fear of death or serious bodily harm and that there was no way of surviving.

There are ‘crimes’ committed every single day, some of these ‘crimes’ are excused because certain factors like; age, mental disorders, automatism, mistake of fact, and mistake of law, prevent an individual from being held criminally responsible, because there was no criminal intent. Some of these ‘crimes’ are justified also by certain factors like; duress, necessity, self-defence, provocation and entrapment. Those individuals who committed a ‘crime’, their act were justified in those circumstances listed above. Both of these defences, excuse and justification require elements to be proven in order to not be held criminally responsible for their particular actions, but some of these defences, like entrapment and provocation are more difficult to prove, unlike proving a mental disorder, or being a certain age.

Canada's legal system is based on a combination of common law and civil law. This selection of law papers is relevant to law students within Canada or for those studying Canadian law from outside of Canada,

Racial Profiling and the Police

The concern about racial profiling is erupting throughout the country....

What is in Fact Economic Loss

ABSTRACT Let us begin with the question: What is in fact 'economic loss' for which a party, individual or a company, is liable under law? The ...... 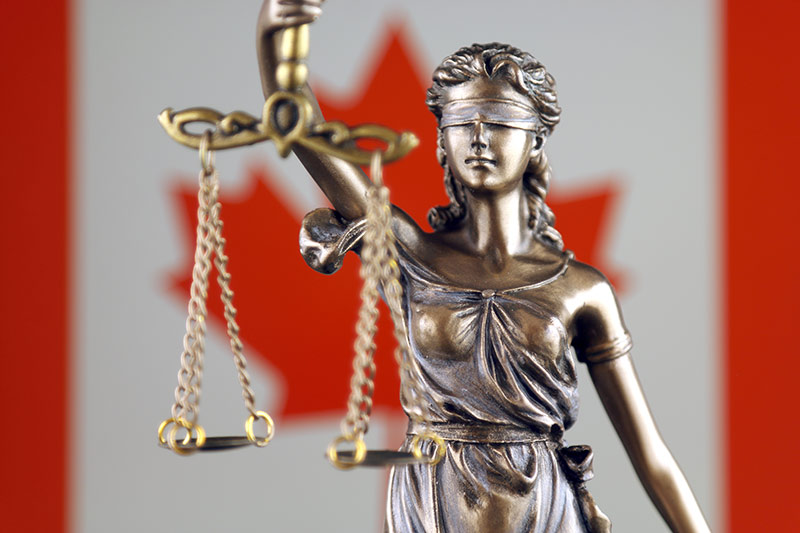