In criminal law, strict liability is liability for which mens rea (Latin for “guilty mind”) does not have to be proven in relation to one or more elements comprising the actus reus (Latin for “guilty act”) although intention, recklessness or knowledge may be required in relation to other elements of the offence. The liability is said to be strict because defendants will be convicted even though they were genuinely ignorant of one or more factors that made their acts or omissions criminal. The defendants may therefore not be culpable in any real way, i.e. there is not even criminal negligence, the least blameworthy level of mens rea.

Strict liability emerged in the 19th Century to improve safety and working standards in factories. These laws are applied either in regulatory offences enforcing social behaviour where minimal stigma attaches to a person upon conviction, or where society is concerned with the prevention of harm, and wishes to maximise the deterrent value of the offence. The imposition of strict liability may operate very unfairly in individual cases as seen in Pharmaceutical Society of Great Britain v Storkwain (1986) 2 ALL ER 635. The justification in this case is that the misuse of drugs is a grave social evil and pharmacists should be encouraged to take even unreasonable care to verify prescriptions before supplying drugs

Examples of Common Law strict liability offences can be seen in cases such as Whitehouse v. Lemon Gay News (a case of blasphemy) or in Irish case Shaw v. DPP (a case of outraging public morals). Usually offences of Strict Liability are creatures of statute, and the construction and interpretation of the statute has been the subject of inconsistencies, in England Lord Reid’s comments that mens rea is to be interpreted into legislation in Sweet v. Parsley (1969) as follow:

There is for centuries been a presumption that Parliament did not intend to make criminals of persons who were in no way blameworthy in what they did. That means that whenever a (legislative provision) is silent as to mens rea there is a presumption that in order to give effect to the will of parliament we must read in words appropriate to require mens rea.

Statutory interpretation follows the five principles set out by Lord Scarman in Gammon v. AG for Hong Kong (1984) which are all followed in Ireland:

As pointed above the first principle is that presumption that mens rea is required, as seen in Sweet v. Parsley and accepted in Ireland in DPP v. Roberts

Second is that the presumption is very strong when dealing with an offence that is truly criminal in character as opposed to being of a regulatory nature, again we note the comments of Lord Reid in Sweet were he stated that “parliament did not intend to make criminals of persons who were in no way blameworthy in what they did.”

Thus in Director of Corporate Enforcement v. Gannon (2002) High Court decided that the limited penalties imposed for breaching section 187 (6) of the Companies Act 1990 indicated that the offence created by that provision was not truly criminal in character, therefore presumption can be rebutted.

We can further see this in CC v. Ireland a SC case were the appellant was convicted of statutory rape under section 1(2) of the Criminal Law Amendment Act 1935 and appealed. In a landmark judgment, the SC held that this aspect of the provision represented an unconstitutional failure by the State to vindicate the appellant’s personal rights protected by Article 40 of the Constitution specially as Article 15 of the Constitution makes for a presumption of Constitutionality given to those acts enacted by the legislative bodies in this jurisdiction.

We can see that from this case where conviction was quashed, and subsequently Section 1(2) of the 1935 Act struck down, that when an offence is truly criminal and carries a severe sanction the requirement for mens rea is very strong. In the words of the Courts “to criminalise in a serious way a person who is mentally innocent is indeed to inflict a grave injury on that person’s dignity and sense of worth”.

Third the presumption of mens rea can only be rebutted where the statute in place clearly so states or does so by necessary implication. This point accepted by Walsh J in The People v. Murray (1977). In B v. DPP (2000) Lord Nicholls stated that a necessary implication connotes an implication which is compellingly clear which can be found in the words of the statute, the nature of the offence, the mischief which the statute was intended to rectify or any other circumstances which might assist in determining the legislature’s intentions.

Thus, the court must examine the overall purpose of the statute. If the intention is to introduce quasi-criminal offences, strict liability will be acceptable to give quick penalties to encourage future compliance, e.g. fixed-penalty parking offences. But, if the policy issues involved are sufficiently significant and the punishments more severe, the test must be whether reading in a mens rea requirement will defeat Parliament’s intention in creating the particular offence, i.e. if defendants might escape liability too easily by pleading ignorance, this would not address the “mischief” that Parliament was attempting to remedy.

Courts should not conclude lightly that an offence is one of strict liability as noted by Lord Goddard in Brend v. Wood (1946):

“It is of utmost importance for the protection of the liberty of the subject that a court should always bear in mind that, unless a statute clearly or by necessary implication rules out mens rea as a constituent part of the crime, the court should not find a man guilty of an offence against the criminal law unless he has a guilty mind”.

Fourth, the presumption can be rebutted only when the statute concerns a matter of social concern involving public safety, and fifth even in such cases strict liability should be necessary to the attainment of the goals of the legislation. In Lim Chin Aik v. The Queen the Privy Council suggested that there must be something that the class of persons of whom the legislation is addressed do something through supervision, inspection or exhortation of those whom he controls or through the improvement of business practices thus in R v. Brockley the Court of Appeal considered the statutory offence of acting as a company director while being an undischarged bankrupt and accepted in construing the offence as one of strict liability as this would ensure that bankrupts would have to take steps to ensure that their bankruptcy had been discharged before acting again as a company director, which clearly assisted in attaining the goals of the legislation.

Similarly in Gannon, the High Court accepted that a strict construction of section 187 (6) would encourage greater vigilance on the part of auditors to avoid being involved in the auditing of companies in which they had personal involvement.

Certain words, when used in statutes suggest that mens rea is generally required, for example words such as knowingly, intentionally recklessly will imply the mens rea requirement. Such words such as causing have been held sometimes not to require mens rea. In Maguire v. Shannon Regional Fisheries (1994) the High Court considered the meaning of the words in the context of section 171 (1) b of the Fisheries (Consolidation) Act 1959 and concluded that the offence was made out whether or not it was done intentionally.

Similarly in Alpha Cell v. Woodward the House of Lords considered the words contained in Section 2(1) of the Rivers (Prevention of Pollution) Act 1951 and Lord Wilberforce concluded that the words contained in the section ‘if he causes or knowingly permits to enter a stream any poisonous, noxious or polluting matter’, that the word causing had its simple meaning and the word knowingly permitting involved a failure to prevent the pollution, which failure, however, must be accompanied by knowledge. However Lord Wilberforce further stated “complication of this case by infusion of the concept of mens rea, and its exceptions, is unnecessary and undesirable. The section is clear, its application plain.

As mentioned above, strict liability can be imposed with at least one element of mens rea being absent from one of the elements of the actus reus, however, it is of utmost importance that strict liability is imposed to offences which do not carry a social stigma, as imposing criminal liability on truly criminal offences where a culpable mind is not present is unjust in my opinion.

Since 1978, Canadian law has also distinguished between offences of “strict” and “absolute” liability, thus in R. v. City of Sault Ste-Marie the Supreme Court of Canada created a two-tiered system of liability for regulatory offences. Under this system, the Crown would continue to be relieved from proving the mens rea of the offence. However, offences of strict liability would grant the accused a defence of due diligence – which would continue to be denied in cases of absolute liability. Further, in the absence of a clear legislative intent to the contrary, the Court held that all regulatory offences would be presumed to bear strict liability.

In the judgement written by Chief Justice Dickson, the Court recognized three categories of offences:

As seen above strict liability are offences of a legislative nature for the most part and the courts have interpreted legislation in order to assess whether an offence is of strict liability, however as noted from the points raised above, strict liability offences should only be retained for the purposes of regulatory offences or summary offences as well as offences that are a matter of public concern to ensure vigilance and protection of society and not in offences that carry severe punishment or social stigma as the law considers that a crime comprises of two key ingredients, actus reus and mens rea, and to make a criminal out of an individual in the absence of a guilty mind should not be the purpose of the law.

The Constitution (Bunreacht na hÉireann) enacted in 1937 is the fundamental legal document that sets out in its 50 Articles how Ireland should be governed. The Constitution is written in both Irish and English. The following selection of essays and cases is relevant to those studying law within Ireland or for those studying Irish law from outside the country.

A trading company has implied power to borrow, however, whether express or implied, it carries implications by law a power to give a security for the loan...

Has the Law Remained True to the Neighbour?

Industrial relation became increasingly popular over the past number of years with the increase of financial prosperity in nearly all industries.... 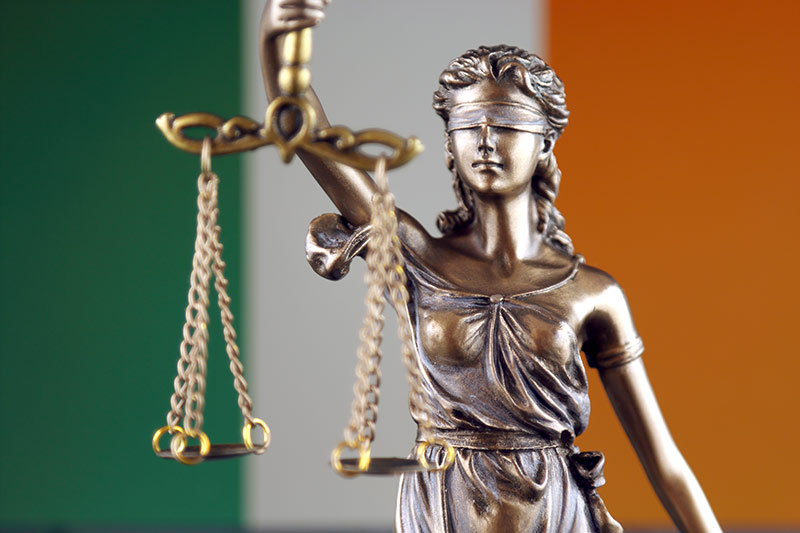